As of this past Tuesday, our little Weight Watcher's group of 4 has lost a grand total of 97 pounds. All since 11/6/07. I tell ya, these women are gonna be tearing up the local race scene this spring and summer.....
at 8:46 AM 1 comment: 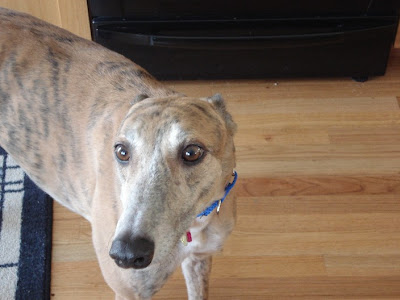 It was the freakingest, been-to-hell-and-now-I-can-say-I-am-back-and-survived run. I have never had a run that hard (and remember - all my runs are hard for me LOL) and I hope never to have a run like that again. I am not going to belabor it because it will cause me to relive the run in all its suicidal hysteria, except to say that it was 18 degrees and 20 mph winds and we did it.

Onto nicer and brighter news....... Dinner party last night :-) Didn't take many pictures - I had 3 glasses of wine and I am a cheap drunk. And you can bet those 3 glasses will show up on the scale tomorrow night at weigh in. Some random thoughts from last night:

Bazu brought this coleslaw. Yeah, I know, coleslaw, right. Pretty standard fare. USUALLY! This wasn't your usual coleslaw though- it was to die for. Pure and simple.

If I had thought about it during the run today, I probably would have dropped dead right there between the pain of the run and the thoughts of the coleslaw glory. Oh, and she wore this cute little scarf tied around her head. That combined with her cute little haircut, well, it was almost cute overload. If I didn't like her and she wasn't so nice......I don't know what but something. You know if I tried to wear something like that, I would probably be mistaken for a drag queen version of Cher from her Gypsies, Tramps and Thieves era. (this is the real Cher - who would know I couldn't find a drag queen singing GT&Ts on youtube?)
SD and Sue both looked stunning - I am used to seeing them in workout clothes, with sweat dripping. It was awesome to see them both in 'regular' clothes. And I think I am going to have to beg for a makeover by SD. Man, if I could get my makeup to look like hers instead of making me look like Bozo the Clown, I might actually wear some.
SD brought her greyhound boy, Pre. For his first time in a strange house he did great. He did get warnings from both the snarky present females, PTT and Lucy. He took those warnings in typical greyhound male fashion, they bounced right off of him and he moved onto the next interesting thing he saw. LOL He was a wonderfully happy boy.
PTT's lack of social skills had her relegated to the bedroom about half way through the evening. She was just way too uncomfortable with so many dogs and I was too distracted to help her cope. She gave a few warnings and then was put away where she could relax. The Black Widow, Lucy, had to keep her muzzle on all evening, but really did good considering all the dogs. Of course, it probably helped that she decided to slut it up towards the end of the evening and was promptly rewarded with overwhelming attention.... 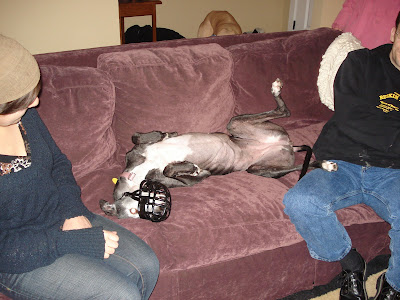 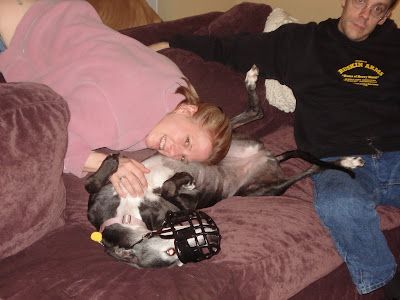 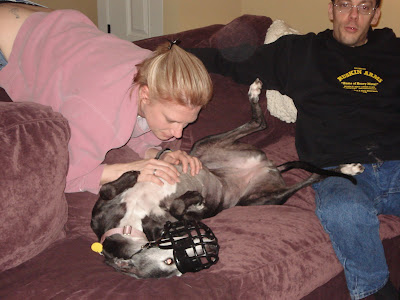 And last but not least, a visit by Bridget is never complete without adding another chapter to the Ode to Cosmo and Bridget saga..... 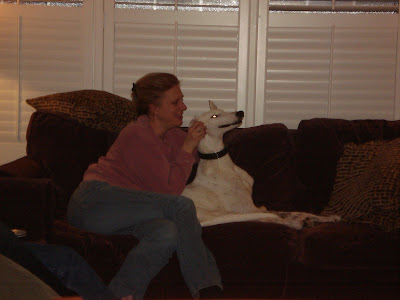 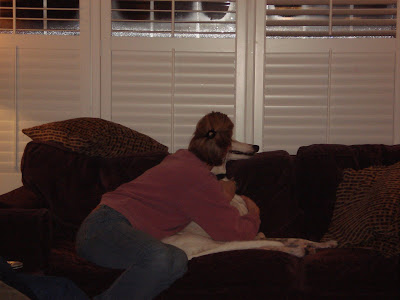 As an avowed, responsible pooper scooper, I love this. Watch out. Next time you don't pick up after your dog, instead of throwing the poo back in your yard, I might decide to liberate something.....or someone.......

C'mon people.....we all know what Jesus would do. He would scoop! 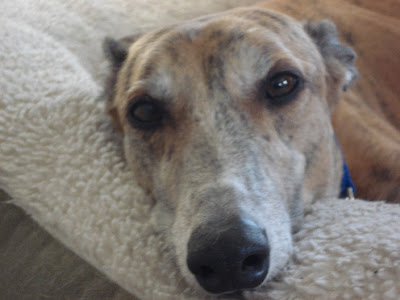 Patina, just turned 6 in January, a little red brindle girl. She was adopted out of MA group (who expressed NO interest in her return to them or a financial assist to the group here who took her in!). A bounceback - her people had a few reasons why they couldn't keep her but I think it boils down to the usual, 'she just didn't fit into their lives anymore'. Thankfully, they did contact a local group that didn't have room for her but put the word out and so W's group took her.

She is a very sweet girl, loads of spunk and personality. She entered our home and was at home, relaxed and ruling the roost, within 5 minutes. However, yesterday, when I took her to B's house for a little cat testing - it was a completely different story. They probably thought I was on crack because the playful, confident, secure dog I had been raving to them about was no where in sight. Instead, she was stressed, anxious, insecure and definitely did not relax much there. Turns out Patina is an actress. She put on a good show of confidence at my house, because, let's face it, my two boys are an embarassment of wimpiness*, even in the gentle, quiet world of greyhounds. Then Patina came up against B's three dogs, who, while very gentle and well-behaved, exude self-confidence as visible auras**. Face to face with true canine confidence, she folded like a cheap lawn chair.

She has her vet checkup today and then will be ready for a home.

*Mal and Mo are as passive as they come but they have their moments, especially Mo. They are dogs, after all. Last night, while turning the dogs out (I held Mal back so he wouldn't get pushed or jostled around), Patina hit her side and leg against the doorframe. She yelped and held her back leg up. While I tried to get around and check her out, Cosmo, who was in front of her, immediately turned around and went at her leg. Not really biting but snapping at her. He got a push and a shove and a 'Knock it off'. He immediately spun around and went at her again (she was still crying out at this point). He actually made contact this time and pulled off a little tuft of hair. Little bastard. My correction was of a harsher variety at this point (harsh meaning I really smacked his ass and in the 'Voice of God' told him 'I. SAID. KNOCK. IT. OFF.') He sulked off, properly chastened and I tended to Patina (no lasting harm done). Cosmo spent the rest of the evening avoiding me, flinching if I got to within 3 feet of him, afraid to look at me. Anyone seeing his behavior would have thought I beat him regularly. Patina spent the night, afraid to get up off the bed and afraid to go through the doors to go outside.

**Even Rimmy, who we joke is always worried and fretful. He has no problem making his wishes known. If he wants on the couch and there isn't room, he will stand there or pace until you make room or will climb up anyways and wedge his 90 lb body in a 1 foot square space.
at 7:51 AM 4 comments:

Newer Posts Older Posts Home
Subscribe to: Posts (Atom)
Let us run with patience the race that is set before us -Hebrews 12:1

~Step away, turn around, let my feet hit the ground...running...~ ***Evermore

What I am reading 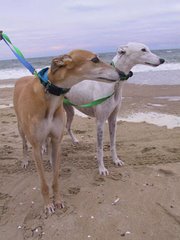